Mental Health Update – A Few Months into Being on Antidepressants

I’ve now been on the antidepressant fluoxetine for over two months, and I thought I’d ramble away for a little bit about how I’ve been doing since starting back on antidepressants.

Mental Health Update: A Few Months into Being on Antidepressants

This isn’t my first time around on antidepressants. I could bore you with my 3 year history of being on and off with taking antidepressants – and truth be told I’ve just deleted 400 words that may as well be titled “The History of Ross and Antidepressants” – but I want to keep this about what’s going on now.

The Side effects of the first few weeks

The first few weeks on fluoxetine came with quite a few side effects. I had a very fuzzy head – still do if I raise my eyebrows really high – I felt a little bit sick and I had one other side effect that I don’t really want to go into too much detail with. Suffice to say, when you’re trying for a baby it wasn’t the best side effect to have. And it wasn’t erectile disfunction before you make that guess.

After a few weeks though it started to settle into my system. The side effects gradually went away and I basically felt pretty normal.

Having it settle into the system

If you follow me intently on Instagram, or even on Facebook, then you may have noticed a slight change in the content I’ve been putting out. Here was the grid before I went on fluoxetine.

A pretty standard Instagram grid. Plenty of baby spam, the odd silly thing from me and that’s about it. Then things started to change. The antidepressant started to do its work, and I started to give less of a shit about holding myself back. All I wanted to do was just have fun and basically take the piss out of myself. Here’s the grid from recent months.

As you might be able to guess, things just get weirder and weirder the longer I’m on fluoxetine. I’m not sure if this is really the work of being on antidepressants, or just my shift in attitude towards what I want to do. If it the antidepressant then they really should consider warning people before taking it. Putting your bollocks – or just the penis mostly – into a reindeer thong isn’t something you want when taking prescription medication.

Looking to Stay on Fluoxetine for the long term

I’ll be honest, a part of me has never liked antidepressants,. I’ve always felt like they’re never the solution, just a temporary plaster that will eventually have to be removed. I always thought they were things that people should never be on long term, but are a great short term solution when things get really bad. How can you really beat depression if you stay on antidepressants? At least that was my thoughts then.

These days, my views have changed slightly. As someone who takes supplements on a daily basis I’m used to taking a few tablets. I have fish oil, probiotics and I used to have a few others too. What’s the difference between taking something for my omega-3 and taking something to help with depression? Nothing.

What if depression is simply caused by a chemical imbalance in my brain and I need this fluoxetine to keep myself balanced? There’s nothing wrong with taking it, so why should I stop just so I can egotistically say I can beat depression myself without the aid of a drug?

No. I owe it to Rachel and Isabelle to be the best possible version of myself that I can be. If that means taking a little tablet every day then so be it. It’s obviously worth it.

Essentially, all I’m trying to say with this post is that I’m doing really well. Probably the type of thing I could sum up in a social media post. But I have a blog, so occasionally I like to post shit on here, you then read said shit. that’s how our relationship works. Don’t get me wrong, I like it when it’s less one sided. If you’re reading this, come say hi!

To sum up the bollocks I’ve just bashed away at the keyboard, I don’t have the dips quite like I used to, but I still have the weird highs where I get obsessive about an idea and child-like excited. That side of me still annoys the BOLLOCKS out of Rachel at times, but then she has her way of dealing with that now. Yes, she’s on Instagram! And yes you need to follow her.

Thank you to everyone who’s supported me over the past few months – and before that obviously – I hope everyone has a good 2019 and let’s just make it a fun one! Hopefully I won’t get removed from Instagram for some accidental “slippage.” 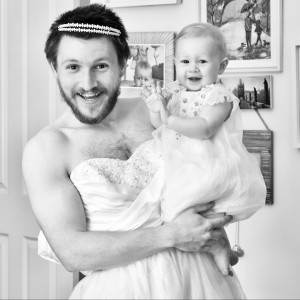 I'm a 28 year old married father of two! I started blogging after suffering with postnatal depression when Isabelle was born. These days I just talk about my life as a dad. Find me on Instagram as I barely ever blog so don't expect much here!

Coping With Losing A Loved One